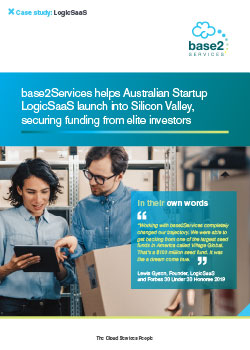 "Working with base2Services completely changed our trajectory. We were able to get backing from one of the largest seed funds in America called Village Global. That’s a $100 million seed fund. It was like a dream come true"

LogicSaaS’ application Ant is a cloud-based middleware platform founded in 2016 that helps retailers streamline logistical decision-making. The application allows businesses with online storefronts to connect services used for inventory management and shipping and automate the processes between them.

The application removes headaches for business owners who previously had to manually forecast demand and manage stock across store networks. In turn this meant faster delivery for online orders and ensured ongoing availability of inventory at physical locations.

With a little help from base2Services, the Melbourne-founded Startup secured investment funding, launched into the United States and won customers across the world. LogicSaaS’ Ant handled $250 million worth of orders in 2018.

LogicSaaS had its sights set on helping businesses around the world automate supply chain systems. The Startup’s appetite for success meant it would need the capability to process vast numbers of orders at unpredictable scale and complexity.

In preparation to take its business idea global, LogicSaaS faced several key challenges. While Ant was a well-developed application, it needed sophisticated back-end infrastructure to prove resilient in the face of the demanding scope of ecommerce. LogicSaaS wanted to attract the interest of venture capitalists, but its early attempts to secure funding were unsuccessful because it could not demonstrate scalability.

One of the key challenges for LogicSaaS was building a system that could handle easy app development across different infrastructure. The company’s environment needed to easily integrate with different software, relevant APIs, and overcome frequent queuing errors. LogicSaaS needed to move away from a monolithic environment and enable scaling, a new application development workflow and microservices.

Another emergent dilemma the LogicSaaS team faced was when the Startup’s CTO, who had set up the initial Amazon Web Services (AWS) back-end, decided to leave the company. With so much technical knowledge controlled by a single person, the departure put the business at considerable risk of failure.

With technical resources suddenly limited and the remaining staff scrambling to manage the environment infrastructure, the Startup quickly needed critical infrastructure expertise to keep Ant alive and positioned to scale

LogicSaaS found a partner in base2Services who provided the expertise and confidence it needed to rescue its application environment and take Ant to the next level support as the business grows.

base2Services’ first priority in partnering with LogicSaaS was to duplicate the environment supporting Ant to retain control of the infrastructure, remove key-person risk and understand how it was organised.

Once replicated, base2Services modified and improved the environment and deployment processes to support LogicSaaS’ goals of ease of access, rapid development and scalability. base2Services containerised some 23 services supporting Ant’s application environment, increasing the scalability, growth and resilience of the Ant back-end.

By containerising the environment, the application was abstracted from the infrastructure, meaning LogicSaaS developers didn’t need to worry about constantly configuring their environment to match the dependencies of their software.

Another key benefit for the LogicSaaS team was that their environment would only scale its traffic capacity in response to customer load and demand, preventing unnecessary spend on unused resources.

Following the containerisation process, base2Services implemented automated DevOps process and workflow enhancements for LogicSaaS with the implementation of Docker and Jenkins, leveraging our open-source automated deployment and management toolset Ciinabox. The configuration meant Ant’s development team could develop locally and build through the Docker and Jenkins solution to test and discover issues before deploying to their production AWS environment.

This continuous integration and continuous delivery (CI/CD) pipeline allowed LogicSaaS to automatically build, test and release updates to the application. It prevented issues

from finding their way into the production environment, increased the speed at which the team could improve their software, and removed manual intervention in the environment when committing updates to production.

base2Services performed this as part of its DevOps as a Service partnership agreement, which is standard across all customer agreements, providing ongoing support, management of the environment and enhancements as the company grew.

The AWS infrastructure and DevOps expertise base2Services brought to the partnership enabled LogicSaaS to mitigate their key-person risk, stand-up a highly resilient application back-end and focus on doing their jobs as software developers.